This biography of George Tsutakawa, the eminent Seattle painter, sculptor, and fountain maker, was written by his daughter, Mayumi Tsutakawa and is found on HistoryLink.org.

George Tsutakawa was a second generation Japanese American (Nisei), born in the United States in 1910. He was the second son of Shozo Tsutakawa, a prosperous businessman who came to Seattle in 1900 and owned an import-export business. George was born on Federal Avenue in the Capitol Hill area and attended public school there until the age of seven, when his father moved the family back to Japan. He attended school for 10 years in the Okayama/Fukuyama area on the Inland Sea, which he remembered with fondness as he later settled in the Puget Sound region. But he was a disinterested student, preferring to practice his drawing and calligraphy. As his father wanted him to pursue a business career, the two had a falling out and, at the age of 16, George was sent back to Seattle where he lived with relatives. He never saw his parents again.

George attended Broadway High School and studied with excellent art teachers. There he met other emerging Northwest artists such as Fay Chong and Morris Graves. He went on to receive his BFA degree at the University of Washington in 1937, all the while working in his relatives’ produce business at Rainier Avenue S. and S. Jackson Street. 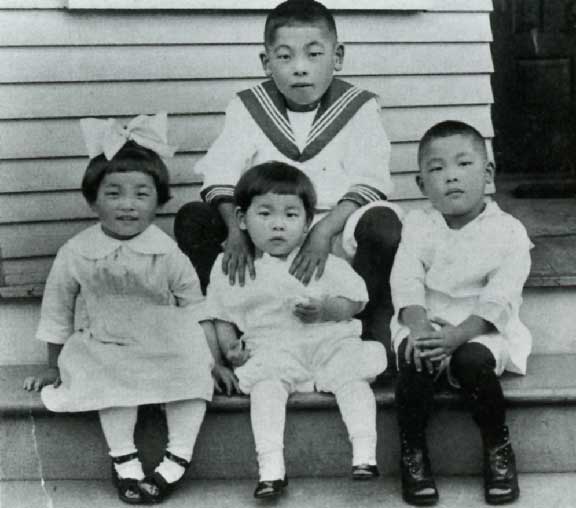 George was an active local artist, organizing and exhibiting in many local and national exhibitions. During wartime he volunteered for the U.S. Army. He spent most of the war years teaching Japanese language in Military Intelligence School at Fort Snelling in Minneapolis. During the war, he was able to travel to the great museums of America, taking the train to New York and Chicago on his furloughs. But he also visited his sister’s family, interned at Tule Lake Camp in northern California. There, he was introduced to Ayame Kyotani, an outstanding student of Japanese traditional dance and flower arrangement, whose family was also incarcerated at Tule Lake. She was to become his wife through an arranged marriage. Ayame was also second generation Japanese-American, having been born in Hollywood, California, in 1924. She, too, had been raised in the Okayama area of Japan before returning to Sacramento. After the war, she came to Seattle and the couple married in 1947.

Tsutakawa’s professional art career spanned 60 years. At first, he used oil paints to explore abstract expressionist themes. Later, at the urging of his friend, the internationally recognized artist Mark Tobey, he began to explore his cultural roots and used sumi paint to depict natural scenes and sea life. After experimenting in wood and metal sculpture, Tsutakawa became known for his more than 70 major bronze fountain sculptures set in public spaces in the U.S., Japan, and Canada.

Tsutakawa’s career was recognized with two honorary doctorate degrees, from Whitman College and from Seattle University. He also received achievement awards from the Emperor of Japan and from the National Japanese American Citizen’s League. He died in Seattle in 1997. Many of Tsutakawa’s children and grandchildren are pursuing careers in art and music.

Gerard Tsutakawa worked with George in the fabrication of fountain sculptures from his teen years, learning to weld and produce bronze sculpture from his father and engineer Jack Uchida. He eventually came to manage the fountain commissions as George aged and passed away at age 87 in 1997. Gerard developed his own artistic direction and sculptural visions and has continued his own independent career, working in the studios that his father had established.

George in the Studio with his son, Gerard. Photo by Lon McKee

George and Ayame’s three other children also continued careers in the arts: Mayumi is a writer and arts manager, Deems is a jazz musician and Marcus is a symphony orchestra conductor. Wife Ayame Tsutakawa passed away in Seattle in 2017.